Only a few people in the cryptocurrency space missed news about the recent hack of crypto exchange Cryptopia. This New Zealand based exchange was for a quite a while a kind of “shitcoin heaven” because they were fine with listing a really low market coin (and you don’t delist those often). This turned up more than 800 mostly low cap cryptocurrencies for more adventurous investors, which made for quite a playing field, where you could either make a lot of money in a very short period or end up with a bunch of coins worth absolutely nothing.

However January 15 was a dark day for Cryptopia. On this day, the exchange was hacked and unknown hackers stole significant funds. Based on information from Etherscan and some smaller projects more than 3 million dollars (the average Cryptopia volume) was stolen. The largest transaction occurred 2 two days before the hack. The whole situation is currently under police investigation. 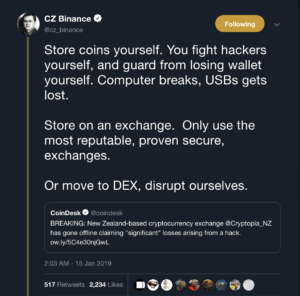 Strangely, some funds ended up on the largest cryptocurrency exchange Binance. This was quite unusual, because normally hackers sell their coins as soon as possible through p2p or decentralized exchanges. As soon as Binance received notice of the origin of these stolen funds, they froze them. However, Binance didn’t obtain this info on their own steam, but were tipped off by an anonymous person on twitter. This led to many conspiracy theories about Binance’s involvement in the whole affair – especially after quite a disgusting attempt to capitalise on this event.

Manage Consent to cookies
We use cookies on this website to provide you with the most relevant user experience. Thanks to cookies, we remember your preferences for repeated visits. By clicking "Accept All" you consent to the use of all cookies. You can manage your consent in "Settings".
Manage options Manage services Manage vendors Read more about these purposes
Settings
{title} {title} {title}
We use cookies to ensure that we give you the best experience on our website. By continuing to browse the site you are agreeing to our use of cookies.I agree